The Beginner’s Guide To Oven Trips and Repairs

Well, you are definitely not alone.

Oven tripping is a common sight in Singapore. However, many people only discover problems with their ovens during festive periods because that is the only time they bake! When that happens, they start to wonder what the problem is and how to rectify it.

The truth is:
Any electrical appliance can trip the house. Therefore, it is important to know the root cause of tripping – only when the problem is isolated can the problematic appliance be determined.

There are a few reasons that may cause an oven to trip the house.

Before we get into it, here are some key components in your oven.

Since it conducts current, it should not touch any component in the oven. Should the heating coil come into contact with other components within the oven, the whole appliance will become ‘live’ and it will be extremely dangerous for the user.

Possible Reasons That May Cause Ovens To Trip

When an oven is not used frequently, there is a very high tendency for it to trip when turned on to very high temperatures.

Why?
Oven tripping problems are inevitable especially in a country like Singapore where there is a high humidity level. This will cause moisture to form up in the heating elements of the oven.

Originally designed to be an insulator, this powder has now become a conductor. Now with a conductance between the heating coil and the rest of the oven through the heating element, the oven will trip every time it is switched on. This is called an earth leakage trip.

2. Short-circuit in the oven

Another possible reason that has caused your oven to trip is a short-circuit.

A short-circuit occurs when there is a direct flow of live current to the neutral terminal of the circuit. This usually trips the Main Circuit Breaker (MCB) and in some cases, causes the entire building to trip as well. Such an occurrence is rare compared to an earth leakage tripping.

Short circuits may happen due to 2 main reasons.

For a direct flow of live current to take place in the oven, there must be at least one component that is broken or faulty. Here are some possible culprits: The heating element is one such component that may cause the oven to short-circuit when it is broken. Due to prolonged usage of the oven, it may shatter and allow current to flow freely to the main body of the oven through the loose end. This will result in a direct short-circuit and the MCB will trip the house.

Fused light bulbs are another common component to cause an oven trip. The light bulb is able to withstand high temperatures but may blow due to over usage or end of life span. When it blows, internal wiring might come into contact with each other causing the oven to short-circuit.

It is common practice to have some spare light bulbs on standby should the need arise.

The function selector switch is connected to a wire distribution module which channels the different wire connections to all the other components of the oven such as the fan and the heating element.

Over time, these wires may become loose or dislodged, causing the oven to short circuit by coming into direct contact with the neutral terminal. This may cause a spark and a ‘pop’ sound too.

When encountering such an issue while using the oven, it would be advisable to call in a reliable oven repair service engineer to check and replace the faulty component as it is not safe to continue using the oven.

There have been numerous cases of pests found interfering with the circuit of an oven causing it to short-circuit. Such occurrences can happen if pests such as lizards or cockroaches are a common sight in the household.

If the oven is not used often, some insects may find their way into the oven and even lay eggs at the power distribution module.

How To Prevent Oven Tripping From Happening? Although this is a common occurrence in all homes with an oven, there is a preventive measure to tackle this troublesome problem and prevent potential oven repair costs!

Most families in Singapore do not cook with the oven weekly and most find it a hassle to use it every week just to prevent tripping issues. But unlike the microwave, the oven may be switched on with nothing in it. Leaving the oven on for 15 to 20 minutes once a week to a temperature of 150 degrees Celsius is sufficient to prevent the oven from tripping.

Although most ovens trip if not used frequently, tolerance for the amount of moisture that can exist inside the heating element varies for different brands. Some ovens can last up to a month without tripping while others may last only a week. However, it is not recommended to test these tolerances lest other components may be damaged. It is always advisable to switch on the oven at least once a week.

Turn On the Oven More Regularly

Having an oven makes your kitchen more functional and aesthetically pleasing. Many households install an oven in their kitchen with the intention to bake or use the oven often but end up not using it due to a lack of time.

Asian recipes utilise the oven cooking method less frequently thus, many families only use the oven once or twice a year during festive periods. As a result, there is usually an increase in oven tripping near festive periods when most families start to bake or cook with their ovens.

All ovens, regardless of brands or models, will be subjected to oxidation in the heating element and earth leakage tripping.

To prevent your oven from tripping:
Switch on the oven for 15 to 20 minutes to 150°C at least once a week.

To solve oven tripping:
Call in a professional service engineer to check and replace the faulty component. 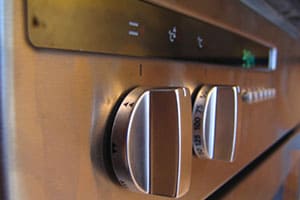 Owners should not forget the simple steps and procedures to ensure their oven operates according to specifications. Regardless of the reasons that cause an oven to trip, turning on the oven regularly is definitely a solution to prevent it from tripping.

FIXWERKS is dedicated to providing repair and maintenance services of the highest quality without compromising safety standards and upholding the finest level of well-deserved customer service.